April Lit Fest at the University of Oklahoma 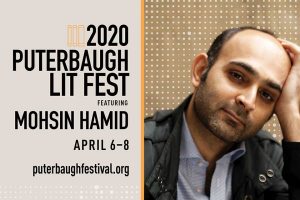 Events start on April 6 with a conversation about transnational fiction between Hamid and writer/educator Adnan Mahmutović and a talk by visiting scholar Masood Raja on Hamid’s book How to Get Filthy Rich in Rising Asia.

The second day will feature a master class on Hamid’s short story “Terminator: Attack of the Drone,” followed by a screening of the film adaptation of Hamid’s most celebrated book, The Reluctant Fundamentalist. The day will close with a reception and book signing.

The final day of the festival opens with a roundtable discussion on Hamid and the contemporary Pakistani novel, followed by Hamid’s keynote address.

All of the events are free and open to the public.

Hamid is the author of four novels and an essay collection. His writing has been translated into 40 languages, featured on best-seller lists and adapted for the cinema. Born in Lahore, Pakistan, he has spent about half of his life there and much of the rest in London, New York and California.

The complete schedule, including times and location, is available online at https://www.puterbaughfestival.org/events/event/. For additional information or accommodations, call World Literature Today at (405) 325-4531.

World Literature Today, OU’s award-winning magazine of international literature and culture, has been published continuously since 1927. Its mission is to serve the international, state and university communities by achieving excellence as a literary publication, a sponsor of literary prizes and a cultural center for students.