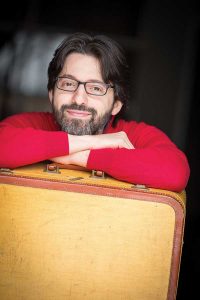 Andrés Neuman (b. 1977, Buenos Aires) is described by Chilean writer Roberto Bolaño as a gifted writer and that “No good reader will fail to perceive in these pages something that can only be found in great literature, that which is written by true poets. The literature of the twenty-first century will belong to Neuman and to a handful of his blood brothers.”

Neuman spent his childhood in Argentina and then grew up in Granada, Spain, after his parents, Argentinian musicians, immigrated there. He has a degree in Spanish philology from the University of Granada, where he taught Latin American literature.

He was selected as one of Granta’s Best of Young Spanish-Language Novelists and was included on the Bogotá-39 list of most outstanding Latin American new authors. He has published numerous novels, short stories, collections of poems, travel books, and aphorisms. His books are currently translated into fourteen languages.

His first novel to be translated into English, Traveler of the Century (Farrar, Straus & Giroux, 2012), won the Alfaguara Prize and the National Critics Prize and was selected among the best books of the year by the critics of El País, El Mundo, The Guardian, The Independent, and Financial Times, among others. This book was also shortlisted for the Independent Foreign Fiction Prize, later receiving a Special Commendation from the jury, as well as shortlisted for the Latino Book Awards and longlisted for the Best Translated Book Award.

His latest novel, Talking to Ourselves, will be published in April by Farrar, Straus & Giroux (USA) and Pushkin Press (UK). The latter will also publish an anthology of his short stories next year. He regularly writes on his blog Microrréplicas, one of the top literary blogs in the Spanish language according to a survey by El Cultural.