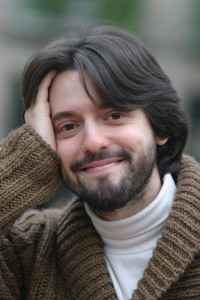 Award-winning Argentinean-Spanish writer and translator Andrés Neuman will visit the University of Oklahoma as the marquee writer for the 2014 Puterbaugh Festival of International Literature and Culture, which will be held March 26-28. Members of the public are invited to attend Neuman’s keynote talk, which will be held at 11 a.m. on March 28 in Meacham Auditorium.

Neuman is the 27th Puterbaugh Fellow and the fifth Argentine writer to be featured in the series, following Jorge Luis Borges, Julio Cortázar, Manuel Puig and Luisa Valenzuela. Neuman’s first novel to be translated into English, Traveler of the Century, won the Alfaguara Prize and the National Critics Prize and was selected among the best books of the year by the critics of El País, El Mundo, The Guardian, The Independent and Financial Times, among others. His latest novel, Talking to Ourselves, will arrive in bookstores in April. He also regularly writes on his blog, Microrréplicas, one of the top literary blogs in the Spanish language, according to a survey by El Cultural.

In Spanish, Neuman has authored numerous books of critical acclaim, including Métodos de la noche (1998), Bariloche (1999), La vida en las ventanas (2002) and Una vez Argentina (2003). Neuman spent his childhood in Argentina and then grew up in Granada, Spain, after his parents, Argentinean musicians, immigrated there. He has a degree in Spanish philology from the University of Granada, where he taught Latin American literature. He was selected as one of Granta’s Best of Young Spanish-Language Novelists and was included on the Bogotá-39 list of most outstanding Latin American new authors. He has published numerous novels, short stories, collections of poems, travel books and aphorisms. His books are currently translated into 14 languages.

The festival will celebrate Neuman’s work—among other writers in contemporary Spanish and Latin American literature—with a series of free events featuring writers and musical performers. The week will include bilingual poetry readings, discussions with Hélène Cardona (poet and translator) and George Henson (translator), and a screening of Argentina’s submission for the 2013 Academy Awards for best foreign language film, Clandestine Childhood (2011). OU’s experts on Spanish and Latin American literature, Bruce Boggs, Arturo Gutiérrez-Plaza and Nancy LaGreca, will also participate in a panel discussion moderated by World Literature Today editor-in-chief Daniel Simon, at noon on Thursday, March 27. The week will be capped off with Neuman’s keynote talk on March 28. A complete schedule of the week’s events, including event times and locations, is available at www.puterbaughfestival.org.

All events are open to the public. Reservations are required for Thursday’s lunch and panel discussion. To reserve a seat, please email Ronda Martin at [email protected].

The Puterbaugh Festival is sponsored by World Literature Today in collaboration with the OU College of Arts and Sciences’ Department of Modern Languages, Literatures and Linguistics and Department of English. Established in 1968 and originally named the Oklahoma Conferences on Writers from the Hispanic World, the series was endowed in perpetuity in 1978 by the Puterbaugh Foundation of McAlester. Each Puterbaugh Festival brings a prominent author to the university for a week of lectures, seminars, performances and cultural events.

For more information or accommodations on the basis of disability, call World Literature Today at (405) 325-4531.